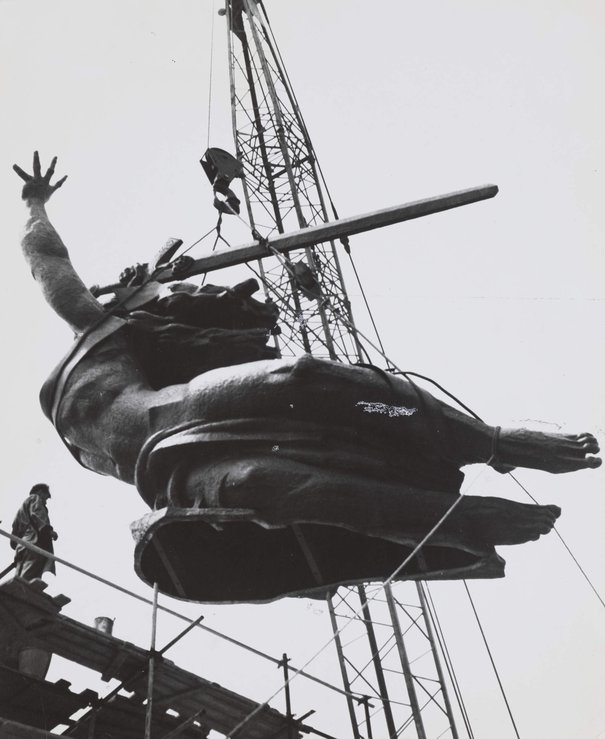 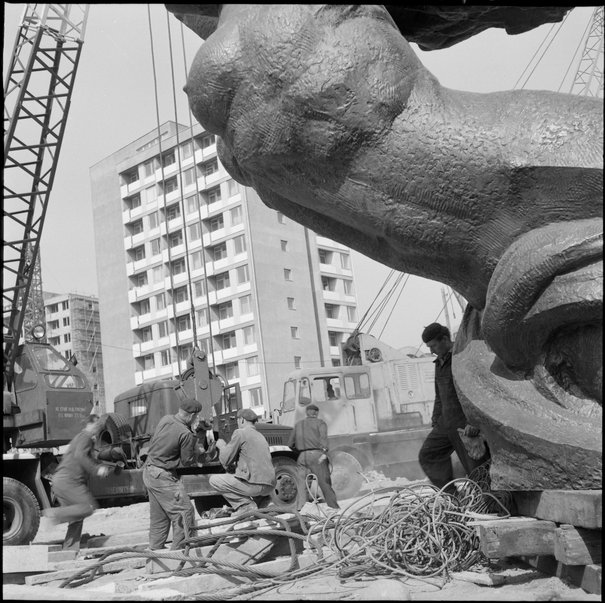 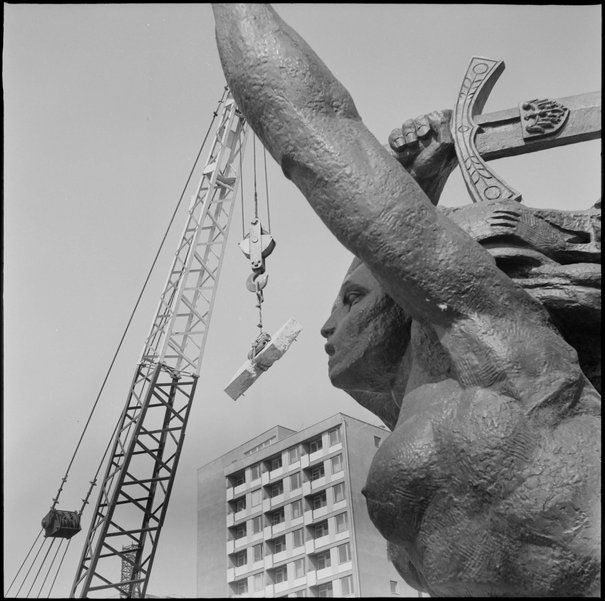 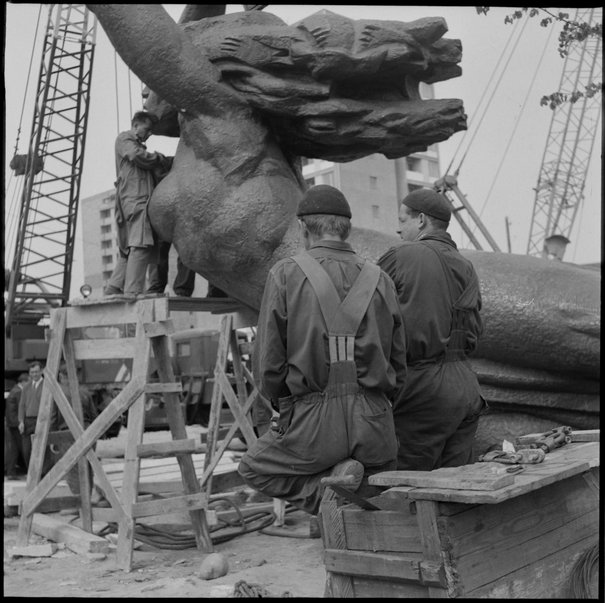 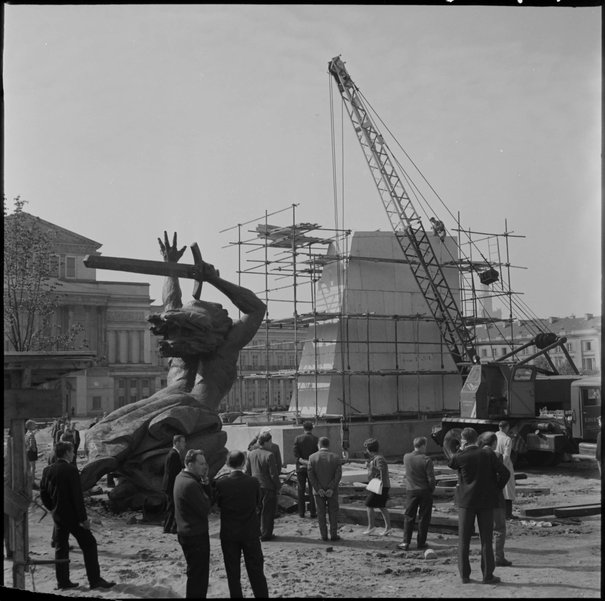 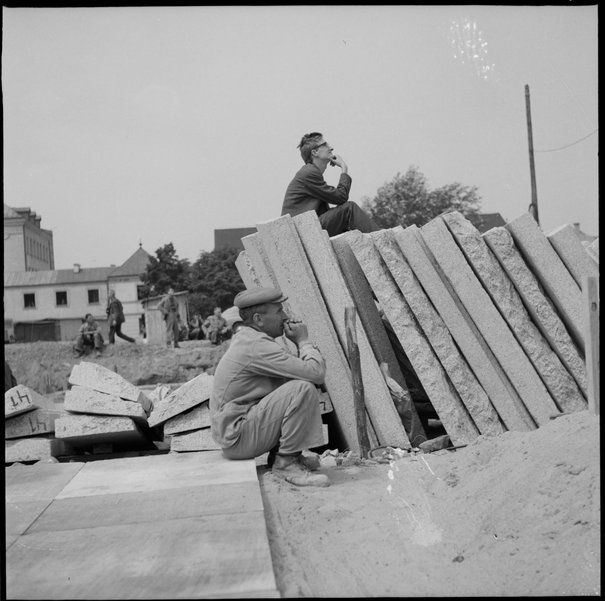 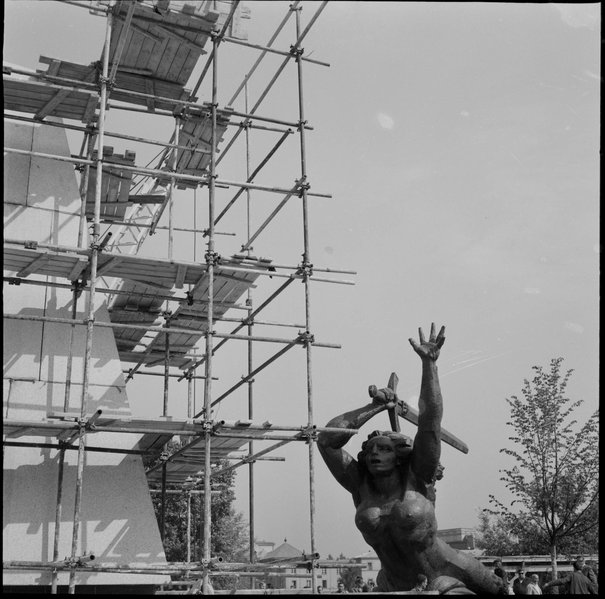 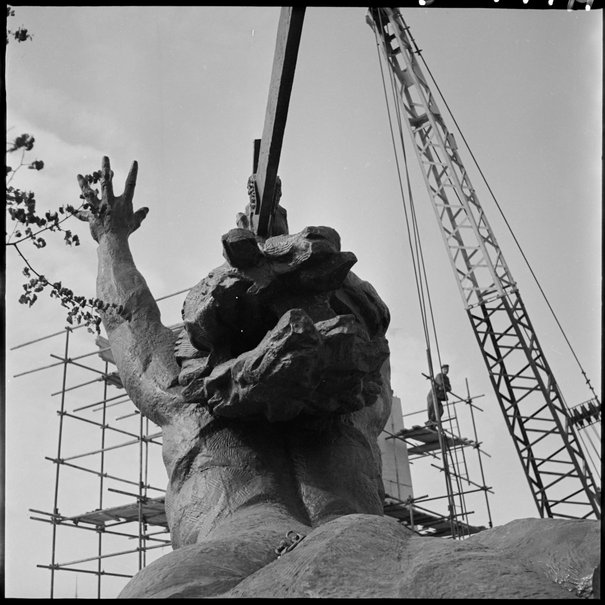 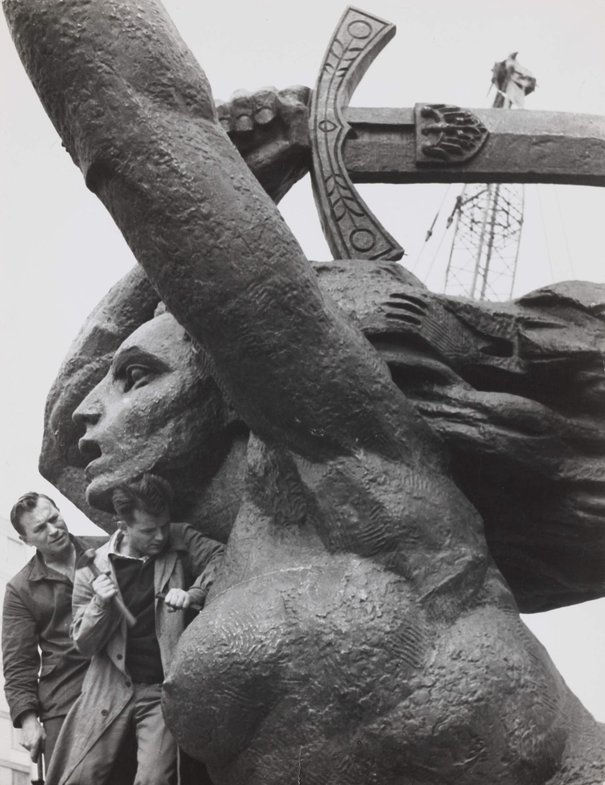 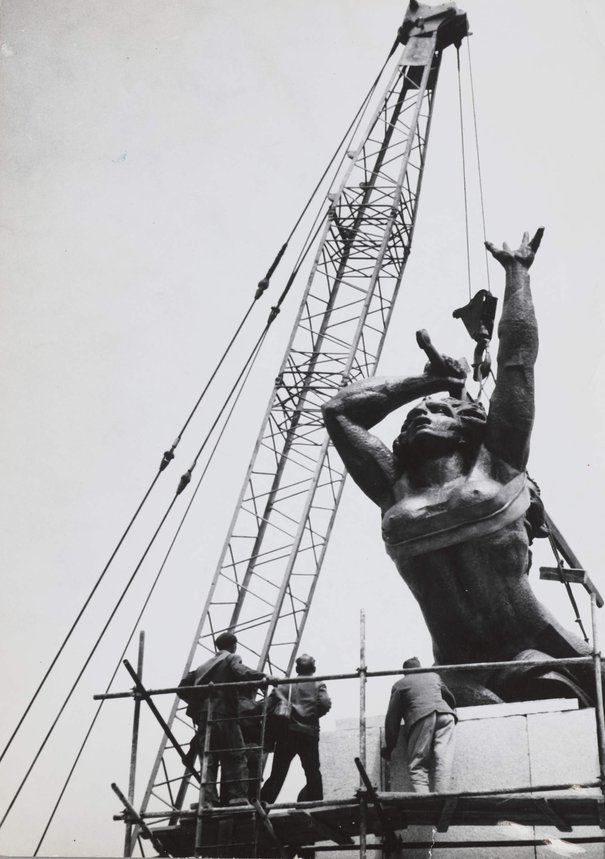 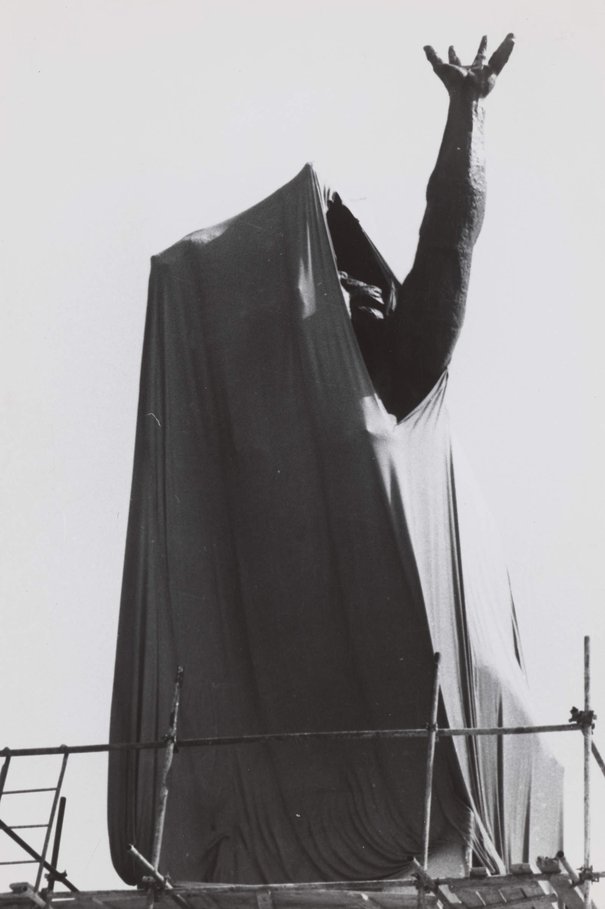 Installation of the Monument to the Heroes of Warsaw (Warsaw Nike), before 20 July 1964 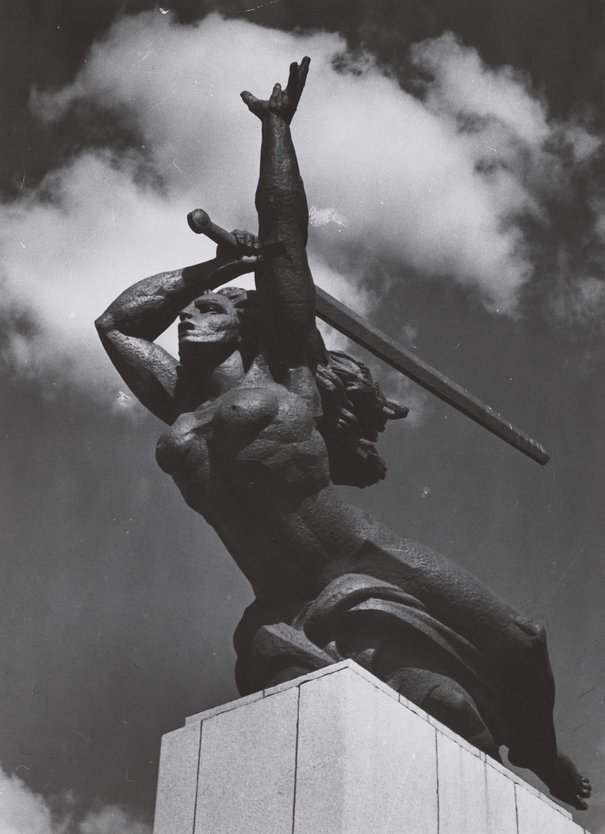 There is an interesting story behind the Warsaw Heroes of 1939 - 1945 monument that is aligned with a heartfelt desire to commemorate the Warsaw Uprising. The desire, which could not possibly be fulfilled in the harsh post-war era, found its opportunity only after 1956. Through people’s contributions, the monument building committee collected a dazzling 7 million Polish zlotys. In the first competition to design the monument in 1957, no first prize was awarded. The following year, the Zachęta National Gallery of Art exhibited interesting competition entries including the second prize winner, a bas-relief pedestal placed in the central part of the Old Town Market Square, and an intriguing soaring form by Bronisław Chromy, utilizing the Vistula riverbed. Another memorable concept was a monumental aluminum spiral or a flame-like ribbon winning an honorable mention for architects Marek Leykam and Czesław Czułowski. Over 100,000 visitors toured the exhibition, evidence of the substantial public involvement supported by the local newspapers and magazines discussing the form and essence of the monument. The committee quickly decided to announce a new competition and in December 1959, the first prize was awarded to sculptor Marian Konieczny, architects Jan Kruga, and Zagremma and Adam Konieczny.
The winning design embedded the Warsaw Nike in the 19th century tradition of figurative monuments placed atop a pedestal.  It was a compromise challenged by a lot of criticism and even protests. From the start, the creation and execution of the monument was charged with tension with the public objection to the sweeping statement of the title: Warsaw Heroes of 1939 – 1945, instead of granting the Warsaw citizens’ wish for it to be dedicated as: Warsaw Uprising Heroes.

The final shape of the monument was a far cry from the initial design. Upon the authorities’ orders, the naked Nike received a drapery, a new facial expression, and a pedestal. At the same time, she lost a barricade at the bottom of the monument made from granite blocks and punctuated with masks for human faces.

Marian Konieczny and the team of architects working beside him decided that the Greek goddess Nike would be the finest embodiment of the will to fight, steadfastness, and the victory of the heroic Varsovians. Curiously enough, they were not the only ones to have conjured up this idea. Alina Szapocznikow also submitted a work depicting Nike. Hers, however, was winged, somewhat abstract, and captured in the moment she is ready to lift off. The quivering form, emulating movement, did not fit in with the principles of socialist realism.

It took four years to complete the winning project. A teenaged Hania Tarczyńska, daughter of architect Jan Tarczyński, inspired the design of Nike’s face. Gliwickie Zakłady Urządzeń Technicznych, or the Gliwice Technical Equipment Plant, produced the cast, and the monument was unveiled on June 21, 1964 in Teatralny Square.

The Museum of Warsaw collection includes 60 negatives and 14 photographic prints by Edward Hartwig featuring the Warsaw Nike. Most of them date from 1964, confirming the artist’s fascination with the newly erected monument.

Hartwig documented the installation in Teatralny Square as early as July 8th, 1964. The sculpture had arrived at Gdański Railway Station in two parts two days earlier by steam train to then be transported to the Square. Just to set the 7-meter tall and 6-meter-long sculpture on a pedestal weighing 10 metric tons was quite a feat. The task engaged contingents from the Gliwice Plant, Przedsiębiorstwa Robót Elewacyjnych i Kamieniarskich, or Façade and Stoneworks Enterprise, and Mostostal – a construction company specializing in bridges and steel structures.

At the time, Hartwig used a medium format camera with black and white, 6x6 cm negatives. As square compositions, the frames were not typical of reporting, but rather premeditated and refined arrangements chronicling the event. The artist witnessed an extraordinary situation which contributed to the somewhat surreal nature of the images. He photographed the gigantic female sculpture from various angles, using both tight and wide framing, always engaging a visual frame of reference, for instance, by including people to convey the sheer size of the pedestal. The images depict the finishing touches on the pedestal, minor chiseling on the statue itself, moving it with a crane, and placing it on the pedestal. They also include the workers and people gathered to observe the event. In the end, the statue was covered so that only the raised arm shot up into the air as shown in one of Hartwig’s prints. The installation works offered a one-of-a-kind opportunity to observe and capture the Warsaw Nike in a unique context and from a tight, almost intimate perspective. Along with Edward Hartwig, the entire process was recorded by a number of photojournalists: among them Jacek Sielski, working for the weekly magazine Stolica. 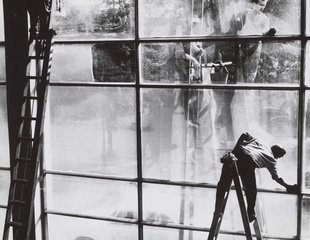 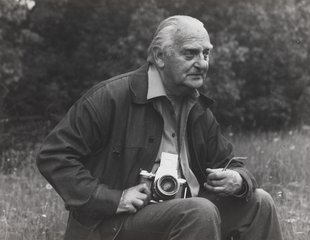 W głąb nocnego miasta
The Museum of Warsaw uses cookies to gather information concerning the use of the e-Catalogue of the Museum of Warsaw Collections. Cookies can be blocked at any time in the browser. Please remember that changing browser settings may limit access to certain functions of our website. More information available at this link - Cookies policy.